When I thought about this the one book which popped into my head was the Knight's Druid. What could be more wicked that a sexy irishman who just happens to be a shifter? If that isn't enough to give you a few naughty thoughts then how about two alpha knights grappling with the feelings they have for each other? what a few wickledly naughty snippets? I thought you would never ask. Lol! 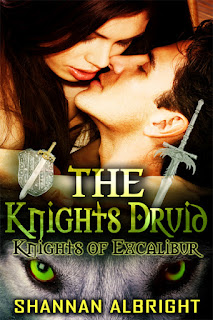 BLURB:
What’s worse than a pissed off Knight? Colin Hennessy.
Shifter, Knight and quick tempered Irishman, Colin remembers vividly his past life as Sir Kay. Haunted by the woman he once loved and lost, he has spent his lives searching for his lost love to no avail. Now Arthur is back and his life once again is filled with purpose. Joined by a common goal, he lives only to protect Arthur and his fellow Knights from the twisted, black magic of Mordred.
Juliet Boyd moves among societies rich and pampered, but she holds within her a terrible secret. One Vance Hollister is determined to exploit. Mordred is back in a new skin, now as Vance Hollister and the old evil is alive and well.
Colin and Juliet are unprepared for the flare of attraction that ignites between them from across a moonlit parking lot. Dare she open herself and expose her cursed gift? Can he save Juliet from Vance’s twisted manipulations or will he lose his second chance at love? A showdown between good and evil is coming to a head with Colin and Juliet right in the middle.
Wicked Excerpt #1 Colin and Juliet

Her breasts pushed tantalizingly against his chest, her core pressed hard to his raging erection. All thoughts went south leaving precious little for his brain to function on. His thin veneer of civility burned to ash leaving in its wake the animal living just beneath his skin. After so very long this one female felt good in his arms…right. He wanted more, he wanted, no needed to touch her all over, bury himself deep inside her. Claim her and be claimed by her. His hands lowered to the full rounded cheeks of her ass, lifting her up closer to him urging her to wrap those luscious long legs around his waist. Colin bit back a curse as her heat ground into his cock with agonizing precision almost making him climax right then and there.

He laid her on the bed his hands eager to learn her body. He broke the kiss lifting his head to drink her in, a man starved finding a feast laid before him. Her skin smooth alabaster, breast’s firm and round, tipped with dark coral nipples. Her small waist flared slightly at the hips, Christ! His throbbed painfully against the fly of his jeans. The scent of her arousal drove him over the edge where instinct took control and all thoughts and arguments crumpled to dust. The only urge, overwhelming in its savage intensity remained. He needed to be thrusting deep inside her or he would lose his mind.

Gods damn me, you’re beautiful,” he husked in a voice more animal than man. “Say you want this, Jules.”

Darius pulled out of her mouth bent and kissed her tasting Simon mixed with him. Salty and sweet, so good he deepened the kiss to lap up more of the heady taste. A hand stroked tentatively through his hair, traveling to his cheek and down his throat. Breaking the kiss he turned his face and found another pair of lips pressing on his own. A tongue darted in through his parted lips in a hesitant exploration.

He wanted more, needed more of the spicy sweet taste, turning the kiss from questing to demanding, his tongue stroking, twisting, and dueling. His heart stuttered as a hunger unlike any he had ever known ignited deep within him, threatening to devour him whole. His pulse quickened, his heart banged in his chest, a painful pounding threatening to burst free from his ribcage.

Darius grew so hard it was painful; usually it took a bit more time to get it up again, but not this time. Realization hit him with the force of a freight train. He was kissing Simon.

He jerked away from Simon with a mixture of surprise and horror. Simon was his best friend, as close as a brother. For Christ’s sake he liked women! The desire still throbbing through his body mocked his words as he stared into eyes glazed with need.

No way was he dealing with this, not now, not ever!

Darius jerked away from Simon as if he’d been burned, looking anywhere but at his friend.

The blonde giggled while readjusting her clothing. “Damn that was hot seeing the two of you go at it like that.”

“I’ve wanted to tell you for so long,” Simon started.

“Don’t,” Darius held up a hand as if to ward him off. “I don’t want to know. You are my best friend damn you, what in the nine levels of hell was that all about?”

“About? You dumb shit. I’ve wanted to tell you. Aw hell, this was not the way I wanted it to go down.”

Simon’s words ravaged him. Panic rose up gripping him with razor sharp talons ripping him to shreds inside.

Darius did the only thing he could do. He followed his instinct and ran like hell.

Interested in more ? I'm giving the PDF of this away to one of you who leaves me a comment on this blog.


Just click on one of the participants below and happy hopping