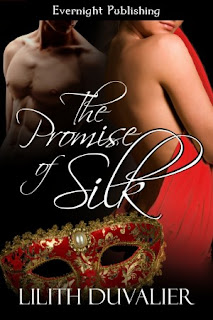 I want to welcome Lilith Duvalier to my blog today. She has a wonderful giveaway in store for you today. There will be a bit more on that in a while. Right now lets grab our coffees, settle into your comfy chair and chat with this Eclectic and talented Lady.

Do you do anything to get you into the zone to write?

I work in my room, so I tidy it up, make my bed and sometimes light a couple of candles. There also has to be music. I go nuts in the quiet.

Which authors inspire your writing?

It doesn’t come across at all in “The Promise of Silk”, but the authors that inspire me most are Terry Pratchett and Joss Whedon. I’m hoping to bring some of that style to the book I’m working on now, “All About The Dress”.
What is your favorite book, character and why?

Lancelot DuLac from “The Once and Future King” because he’s the most perfectly        written imperfect character ever. TH White gives him this tragic self loathing as his motivation for trying to be the perfect knight and manages to write every single character, even someone as evil as Mordred, as a real human being with reasons to feel bad for them, even when they are doing evil.

Which famous person, living or dead, are you drawn to?

I am so jealous of and impressed with Chris Colfer. He’s just ridiculously talented and incredible and, at three years younger than me, has accomplished everything I ever want to do in life, while still seeming to be pretty well put together.

Where do you see yourself in five years?

Finish this sentence: I know I’ve made it when –

people leave me reviews like “this isn’t my thing, but I liked it anyway.

What advice would you give aspiring writers?

What do you see yourself writing in the future?

I have an m/m historical western nearly done and the project I have lined up  after that I’m calling a “gender-queer” romance, and it’s about a few heterosexual people who find themselves in situations where gender and sexuality get a little fluid. The alpha male character has a secret and the another character finds himself embarking on a somewhat unconventional relationship. It’s a contemporary and a little bit of a comedy.

If you could have one superpower what would it be and why?

I want to be able to teleport. Commuting is the worst thing in the entire world.             Also, then I could sell my car and not have to take the bus.

What time of the day are you at your best to write?
From 11-2 at night. I can double a whole days worth of writing in those three hours.  I am constantly exhausted.

And now for something completely different…

What do you look at first with an attractive man or woman, face, body or smile?

A snow day, preferably with at least one friend snowed in at my place. Then a whole day of Buffy and cookies and wine. Possibly a nap and some writing.

What is the most decadent desert you can’t say no to?

I had a friend at one point who would randomly show up at my apartment with             pans and ingredients and make things, like some sort of pasta and booze elf. He once showed up at midnight with a blender one time and made us these amazing chocolate, rum, khalua shakes that we have never been able to recreate.

Do you have a favorite holiday what is it and what makes it special to you?

Christmas. I like doing the family and food thing.

What key words describe you best?

Now for the Giveaway!

How do they enter to win?

Simply go to Lilith's blog Look on in Lust leave her a comment under her "enter to win" post. She will announce the winner on Friday 11/4/11.


Good Luck everyone and have a great day
Posted by Rene Broux at 12:00 AM