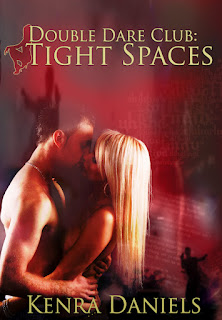 One thing I simply love about being a romance writer is the friends I make along the way. When one of them thinks of me when they put together a blog tour I get so excited you would think it was my release. I am so happy to present to you a good friend and very talented author Kenra Daniels.
A little about Kenra Daniels:
Kenra Daniels lives in a tiny rural community in north eastern Kentucky with her very own Romance Novel Hero. In addition to Erotic Romance, Kenra writes Paranormal Romance, and has plans for Historical Romance, Urban Fantasy, and a few other things. She has a completely new paranormal being in development and will soon start those stories. With multiple other projects in the works, time and energy are her only limits.

A lonely woman goes dancing with friends to kick the Bad Breakup Anniversary Blues. Her fantasy-man is willing to help, until her lowlife ex ambushes him.
With the first anniversary of the messy break up of a long-term relationship bearing down, Amy has the blues. When her friends suggest an evening at the Double Dare, she reluctantly agrees to go along. She doesn't do the casual sex thing, but it'll be good to spend time with her friends.
Seeing Jesse at the Double Dare immediately cheers her up. She's fantasized over him for months. The evening gets more pleasant as they heat up the dance floor. Things go from hot to sizzling, until her ex shows up and confronts Amy in a low blow. Will his interference deter Jesse and Amy from continuing what could be the start of something wonderful?

EXCERPT:
She joined several other club-goers in the line at the door and waited her turn to be admitted. The odor of mingled perfumes, colognes, BO, and cigarette smoke made her stomach roll a little before she became accustomed to it. The neon sign suspended on the wall several feet overhead flashed, eerily illuminating the faces of those waiting in bursts of red, green and blue. Macabre shadows danced around, at odds with the nearly tangible sense of eagerness emanating from most. Amy shook the images from her head before they could take root. A long-time fan of horror fiction and the paranormal, such idle fancies had a way of setting up housekeeping in her imagination, only to reappear later as nightmares.
Amy let her gaze wander over those ahead of her in the line, trying to assess their status. Some were easy to tell, couples leaning against one another, lost in their own secret world. A few lone males stood out, conspicuous in their rarity. Nearly everyone in the line had at least one companion.
A trio of barely legal guys stared at Amy, bold as brass, and talking in low voices with an occasional laugh thrown in. They didn't bother to keep their topic of discussion private, wondering aloud which of them Amy would choose to fuck first.
A young woman, svelte in a black mini dress, pin straight platinum blonde hair swinging about her ass, approached Amy from the side. "Watch out for those guys." She indicated the three young men with a nod of her head. "They won't take no for an answer, even if it means following a girl out of the parking lot at closing. And it looks like they've picked you for their target tonight." She moved away before Amy could ask any questions.
Amy decided to take the warning seriously. A smart woman didn't take that kind of chance. She deliberately avoided making eye contact when the one in the middle tried to smile at her.
The young man drew sullen brows down when she refused to play the game, to the delight of his companions. "Uptight bitch. Be seeing you."
The very real threat in his tone sent a chill down Amy's spine. As a precaution, she surreptitiously studied all three, memorizing their faces and clothing, intent on giving them wide berth. If she never saw them again, it would be too soon. Satisfied she could easily recognize the troublemakers, she turned her attention elsewhere.
A nice-looking guy, with definite potential, near the front of the line looked her over. Before she could return his smile, a leggy redhead in painted on jeans and a translucent top approached from the parking lot and joined him. Amy gave him a rueful grin and made a point of looking elsewhere.
Finally, the doors opened, and the line started to move. The doorman checked IDs, turning away one young couple with fakes. By the time Amy made it to the front of the line, the heavily muscled man had relaxed a little, and started flirting with some of the women in the line. When Amy's turn came, he gave her a nod while his blue gaze flicked up and down, taking in her appearance.
His smile broadened when his gaze arrived at her generous breasts. "That's an awfully nice dress for a dump like this, Sweetheart." His voice, rumbly and intimate, sent a charge directly to Amy's pussy.
She licked her lips before answering, causing heat to flare in his eyes. "It's my favorite, so I decided what the hell."
"If you get tired of the jerks inside, come on back out and keep me company a while. I know how to treat a lady." His voice promised a good time.
Feeling especially daring, Amy made of point of letting her skirt brush against his pant leg as she walked past. "I'll just bet you do." With a long look over her shoulder, she headed on through the heavy steel door.
God! Had she really done that? Embarrassment heated her cheeks. Never in her life had she behaved that way! Every male without sight would read her actions as coming from a bitch in heat. Hopefully those young jerks hadn't paid attention. Otherwise, they wouldn't be able to resist paying her a visit.


Hi Shannan, thanks for having me here today!
Writing Erotica, Erotic Romance, or even Sensual Romance – anything with graphic sex – comes with some unwanted consequences. As soon as people find out what I write, there's always the raised eyebrow. Then the person either leans back a little and starts to move away, or they lean forward and smile. By now, I can tell by those first little reactions exactly what they think of books with explicit adult content.
The folks who lean back? Well, you guessed it. They're afraid something unpleasant might rub off on them. I don't know if they think Erotica writers actually do what they write, as they write it, and don't ever wash their hands, or what.
The ones who lean forward a little and smile? They want ALL the juicy details. After all, everyone knows, to write that sort of material, a person would have to have a VAST amount of experience. Apparently, these folks figure that for every hot scene we write, we've lived far hotter ones. And for some of us, that might be the case. I don't know.
The thing is, most novelists who include graphic sex scenes in their work are just normal people. Maybe married, maybe single. Male or female. Kinda young or kinda old. Most have no more experience than any other average person of their age and gender, and some have even less.
Writing hot sex scenes is all about the imagination, and the ability to involve all of a character's senses in the scene. Without that quality, the scenes will be more funny than arousing. And while we might get a little pissed when people move away, or lean in for the details, we really don't want them laughing unless the scene is part of a comedy.
Thanks again for having me here, Shannan! I just released a new Erotic Romance novella, "Tight Spaces", Book #1 of my new "Double Dare Club" series. To celebrate, I'm giving away some copies of "Tight Spaces", a $10 Amazon Gift Card, and I'm working on some other things but don't have confirmation yet, so I can't announce them. So don't forget to hit the Rafflecopter below, or at my site http://kenradaniels.com/double-dare, and enter for your chances to win! Also, check out the Archangel's Creed page (assuming I've finished the page!) on my site for a sneak peek at what my critique partner, Azure Boone, and I are working on next!
Thanks again, Shannan!