Welcome to a special spotlight for a fresh talent.
Bio:
Ron Rening was born during the Eisenhower Administration (1956 for those who aren't up on dates.) In the middle of Redlands, Ca. He started the majority of his writing while in Germany during his time in the Air Force. He cites Joshua Lawrence Chamberlain, James Peter Longstreet, Sandy Koufax and George Patton Jr. as his heroes and the cause of his insanity. He currently lives in Las Vegas, NV with his loving wife, and his greatest accomplishment, his daughter.
Ron Reining's new Paranormal Crime and Punishment story has a new twist on zombies I found quite intriguing. 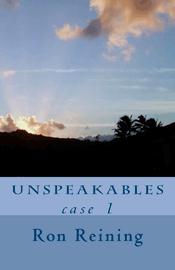 BLURB:
Jeff’s life is destroyed in one single act of violence. The only thing left for him is revenge against the one who savagely killed his family. Recruited by Zee Castle, a covert organization that brings unspeakable events to a close. With his partner, Victoria, a newly animated zombie known as a Zed, he learns there may be more than revenge to live for. Together, they must learn to trust each other if they are to stop the atrocities being committed in the world.
Excerpt:
When the men entered Victoria pulled its face out of the half can in its hands and hissed, long and loud. It cradled the can protectively away from the men, cut fingers and absolute defiance etched on its features. A ring of cut flesh with a smattering of dried blood formed a circle around the face. Victoria had been breathing the essence of the coffee grounds as if a feline was overdosing on catnip. The creature of the floor was undeniably intoxicated. Movement and sound were slow and slurred. It was responding as if it perceived everything as a threat to its possession. While Dale did his best to maintain a straight face Jeff crossed his arms and glared.
“Bad Zed! Bad, bad Zed!” he growled.
The defiance remained and another hiss followed. Drunk or not, a low growl could be heard. Jeff repeated himself.
Victoria began straining and shaking. Finally,” Hun…ger!” Her first word.
Jeff growled, “What?”
Fighting, Victoria stammered, “Hun-ger! Hun-gry!” It then nearly screamed, “Hun-ge-ry! Vic-tor-a hun -ger-y!”
Jeff maintained his stern parental posture and demanded, “Bad Zed! Zed 306, remove your clothing. Bad Zed!”
Dale caught on instantly. Victoria didn’t understand at all. “Vick-tora hun-gary,” it repeated.
“Bad Zed! You have no name! You are a bad Zed! Remove your clothes! Bad Zed has no clothes!”
While Dale watched in amazement, Victoria was crushed by Jeff’s words. The Zed stared at Jeff, then at its lap. Then it began moaning. While the men watched, the Zed slowly fought itself out of its bra and shorts and laid both gently on the floor before itself. Zed 306 then laid its arms and lifeless hands across its lap as if they had come to the end of their usefulness. From deep within its throat came a most pitiful wailing cry, not unlike a kicked puppy in lingering pain.
Dale turned to face Jeff and, holding a finger across his lips, motioned outside with his eyes. Jeff turned and they heard, “Vic-tor-a…. Vic-tor-a sor…ry. Vic-tora sor…ry, Vic….”
Jeff growled, “Bad Zed! Bad Zed has no name!” The two men then left the apartment.
Once the outer door was closed they both lost it. They eventually shook hands in success. Jeff then mentioned that the true result was waiting for them. If Victoria remained as it was, remorseful and empty handed, it had learned its lesson. If its head was back in the coffee grounds they really had their work cut out for them. Well, he did. Dale was an advisor, not an investigator in training.
The two returned to the scene of the crime a little later. Victoria hadn’t moved. It sat and moaned, “Bad Zed is no name,” over and over while staring at her clothing. It was quite possibly the most pitiful display either man had yet witnessed. It took a supreme effort to keep a straight face and even temperament.
Jeff walked up to the unfortunate and held out both hands. “Zed 306, come.”
After a number of “Bad Zed is no name,” repetitions aired, and were counteracted by Jeff’s soft command, Victoria took his hands and stood. Jeff released one hand and led it out. A smiling Dale took another couple of minutes to survey the damage. With a silent chuckle he began returning the kitchen to this world. Once the major damage was resolved he retrieved a previously unopened can and made a fresh pot of coffee. He then continued cleaning while the pot gurgled. Jeff couldn’t use cleaning as a form of punishment. Victoria’s motor skills were yet unequal to such a task, and this was hardly bad enough to warrant calling in an engineer. All part of the job, he told himself.
In the meantime Jeff was back at parenting. He took Victoria to the bathroom and wiped it clean, then put it back inside a fresh set of underwear. Victoria tried to resist at first, and it was a feeble effort. It repeated, “Bad Zed has no name.”
“Good,” Jeff replied. “Bad Zed has no name. Bad Zed has no clothes. When bad Zed learns good, Zed becomes good Zed. Good Zed is named Victoria. Victoria is good.”
The words were simple enough for Victoria. Unblinking eyes said a lot, and understanding was in the forefront. “Good Zed now?
Jeff smiled down on the redhead. “Victoria remembers how to speak now. That is very good. Victoria will remember more soon. Victoria will become smart again.”
Victoria began beaming in an undead sort of unblinking way. “Victoria is good? Victoria is good.”
Jeff then frowned. “If Victoria wants coffee, Victoria must ask for it. If I say no, no coffee. If I say yes, small coffee.”
Victoria understood. She then remembered how to smile.
Now it's contest time. Want more?Ron is having a giveaway. One lucky commenter will be getting a copy of Unspeakables for their own. Be sure to leave your email address so he can inform you if you won.
It’s now available for Kindle too!
Ron can be found at:
http://www.fallingangelchronicles.com
email him at: rreining2010@gmail.com
﻿
Posted by Rene Broux at 12:00 AM