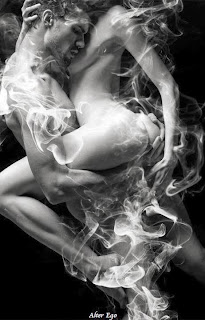 Happy Monday!
I'm starting this Monday Post with a pic I call Passion. This is the essence of my latest book Soul Fire. Coming out in January, it's a paranormal novella set in thirteenth-century  Brittan on to windswept coast between what is now called England and Wales. Rugged and wild, this is an untamed land where the sea is at constant war against the earth. It seemed a fitting setting to place my dragon shape shifters and the women blessed by the gods who can claim them...and live.
Here is the taste I promised you.
With a groan of need he opened to her giving her access as she delved into the moist heat of him. His arms wrapped around her, one large hand at the back of her head as he took control of the kiss. White hot fire exploded low in her belly, pulse thrumming with ferocity she feared she would perish from such intense desire.
His body shivered against hers before he gently broke off the kiss. His gaze devoured her one delicious inch at a time. He left little doubt how she affected him. The thought brought a sense of power to her that she could bring out such passion from him.
“I am undone.” He rasped in a voice husky and breathless with need.
His warm breath teased her cheek, sending a delicious tendril of fire licking over her limbs to settle with aching intensity below. Her thoughts became chaotic, a primitive need rising strong within her. She should be afraid, but nay, she reveled in the dark passion, surrendering utterly to its tantalizing lure.
Her hands dropped to stroke the expanse of his hard muscled chest, fingers tangling within the soft linen of his tunic and tugged.
“You wear far too many clothes my lord.” Her desires clear in her dulcet tones, even to her ears.
When writing I always have character pictures. I am a visual person. My creativity shows me through images, much like a movie without sound. THAT I put in with the logic side of my brain. Let me introduce to you for the first time 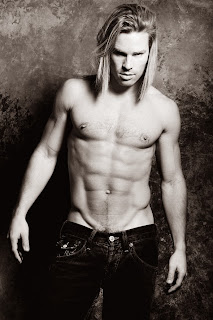 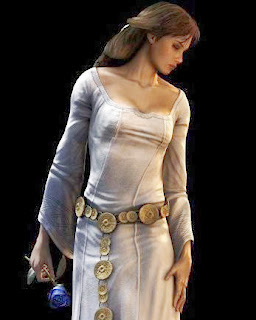 Aslynn Durry, village healer and touched by the gods Drakkan and Rhiannon to save the dragon race from extinction.
I'm very excited to be in the finishing stages of this book, but also a bit sad that Crispin and Aslynn's story is coming to a close. I think that's the case with every book I create though.  With everything I do, be it painting, dancing or writing I leave a bit of myself behind in the process. I've been wanting to do something historical for a long time. History has always been a passion of mine, and I've had so much fun delving into the past.
And now, on to other news. I've got a winner from my recent blog hop. The Book Lady won a copy of my current release Happy Holidays from the Crescent Moon Lodge. I had so many wonderful comments I couldn't choose, so I went to random number.org and let them choose via a number.
Now that Soul Fire is almost put to bed I'm concentrating on Zeke's book Dark Desire and will be exerting most of my efforts on finishing his story and beginning the next book in the Dark Breed Enforcers series. No rest for the wicked or the weary Lol!
Though I gave it my best shot to get both Soul Fire and Dark Desire out this year, unfortunately time was not on my side. I'm not a quick writer. I never could crank out a book in thirty days like so many others I know. I work in layers, going over and over what I wrote and adding to it as I go. My inner editor never takes a nap, damn it. So as much as I wish, I can't put out something I'm not happy with. Just like my painting I won't show what I'm not satisfied with.
So for now, it's back to work. Have a wonderful week and we will chat again next Monday.
﻿
﻿
Posted by Rene Broux at 12:00 AM