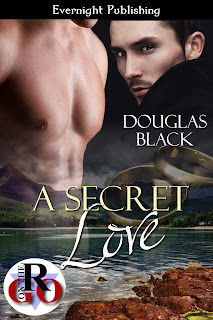 I am excited to bring you a great talent from Scotland I was lucky enough to meet through my publisher Evernight. Through chatting with this very charming man I just had to invite him over and was thrilled when he accepted.
And I am very pleased to offer everyone a very special treat. Douglas has agreed to do a week long contest! Here is your chance to win A Secret Love. So how do you go about entering for your chance to win? Just leave a comment to Douglas's question:
In A Secret Love, James and Mark Head off for a romantic weekend getaway in a remote hotel in the Scottish highlands. (Boy, sounds good to me I'd be there with bells on.)Unfortunately nothing goes remotely as planned.
The question is:
What has been your most disastrous romantic weekend/date?
When commenting please be sure to leave your email address, so he can contact you. The winner will be chosen next Monday from those who are the worse/funniest and will supply a copy of A Secret Love in whichever format the winner prefers.
Author Info
Douglas Black was born and raised in bonnie Scotland. He started writing erotica as a means of paying the bills when he was a student at university, but after graduation he found he no longer had the time to write. Over the summer of 2012, Black picked up a pen once more. After a brief, successful flirtation with self-publishing, Black’s novella ‘Business or Pleasure’ was picked up and released in April 2013. It quickly made the publisher’s best-sellers list. Douglas Black’s short story, ‘A Secret Love’, was published in July 2013 by Evernight Publishing.
Links
http://amazon.com/author/douglasblack
http://www.goodreads.com/DouglasBlack
https://www.facebook.com/pages/Douglas-Black/1632968396841732
https://twitter.com/DBlackErotica
Inspiration for A Secret Love
‘A Secret Love’ is a short story about two men – James and Mark - who have spent many years hiding their relationship. They are forced to meet up in secret, and their work and life commitments mean it is impossible for them to see each other as often as they want. They manage to get away to be together once every few months at most. After years of enduring such strain on their relationship, they have decided to leave behind everything they know so they can be together.
With six months left in which they still have to continue their love affair in secret, they meet up in an isolated hotel for a weekend together. While they are there, their actions attract the attention of an interfering older couple who make their disgust apparent. Their weekend together threatens to be overshadowed by the actions of others, but worse than that, it may blow their cover and ruin not only all their hard work over the years, but also destroy any chance of them achieving the future together they so desperately want.
The idea of people having to hide not just their sexuality, but also their relationship because of societal pressures was appealing to me and was one that I wanted to explore. With the recent leaps and bounds made in the fight for marriage equality and equal rights in general, this story could seem out of place, but it is a sad reality that so many people throughout the world have to hide their relationships, whether because of their jobs, pressure from the media or their families, or any number of other reasons.
This simple reality was the main inspiration behind ‘A Secret Love’. While the story focuses mainly on the (often steamy!) interactions between the two main characters, I wanted to look at how outside pressures on a relationship might impact those involved. In my story, the characters rise above the pressure, deciding to move and build a new life for themselves abroad, but I am aware that not all secret relationships end that way. James and Mark got their happy ending. I look forward to the day when that outcome doesn’t put them in the minority.
Blurb
James is nervous when he pulls into the car park of the secluded and conservative Caledonian Hotel. He slips off his wedding ring, gives a false name at reception and checks into his room.
When Mark finally arrives James expects their time together to conform to the usual pattern, but Mark surprises him. Mark wants candlelit dinners and walks on the beach. James, well, James just wants to make up for lost time. More importantly, he doesn’t want to get caught. They have six months left before they can leave behind everything they know and start a new life together and James is desperate to be discrete. Unfortunately, he never could control himself around Mark. Throw in an interfering old couple and some very public displays of affection and Mark and James’s short hotel stay might just be about to destroy not only the secrecy that has always shrouded their relationship, but also their plans for a future together.

Excerpt
Mark returned the kiss passionately. James trembled in his arms. Tension coursed through his body and he could feel it mirrored in Mark’s. He could almost taste the other man’s nerves in his kiss. James savoured Mark’s strong arms around him. He pushed his hands inside Mark’s suit jacket and clung to the warm, toned body underneath. The body was so familiar despite the amount of time that had passed since their last meeting.
“God I’ve missed you,” James said when he finally pulled away. Mark was breathless and didn’t respond at first, but the sexy, playful smile on his lips told James everything he needed to know. James took his hands and led him further into the room.
It was a large suite with living area and a huge bathroom. Mark swung a new sports bag, bright orange and emblazoned with sponsorship logos, off his shoulder and dumped it onto one of the two couches. He paused momentarily, reaching into his suit pocket.
James watched as Mark pulled out his phone and turned it off without checking for messages. He waited patiently until Mark had tucked it safely into his bag and smiled at him when he had finished. “Difficult getting away this time?” he asked.
Mark nodded. “I left as soon as I could. I was so scared I was going to miss the flight. I’m sorry it had to be mid-week this time. Will you get in trouble at work?”
“I have the flu.”
Mark smirked. “You look perfectly healthy to me.”
“It came on all of a sudden,” James said, closing the space between them. “Unexpected. Probably be gone in a few days. You know how these things are.” Mark nodded and James slipped into his arms once more. With his head on Mark’s shoulder, he turned to whisper against the other man’s neck. “I wouldn’t have been able to stand it if you had missed the flight, if you had cancelled. It’s been so long. It’s always so long.”
Buy Links
http://www.amazon.co.uk/Secret-Love-Romance-Go-ebook/dp/B00DV6Q52M/ref=sr_1_1?ie=UTF8&qid=1373539149&sr=8-1&keywords=douglas+black+a+secret+love
http://www.amazon.com/Secret-Love-Romance-Go-ebook/dp/B00DV6Q52M/ref=sr_1_5?ie=UTF8&qid=1373539183&sr=8-5&keywords=douglas+black+a+secret+love
http://www.evernightpublishing.com/a-secret-love-by-douglas-black/
http://www.bookstrand.com/a-secret-love-mm