Wicked Scavenger Hunt - Spend the day on the dark side 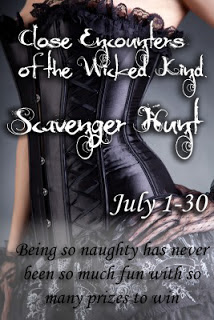 Welcome to the dark side. Where sexy, dark and oh so yummy supernatural's  go bump in the night. I'm not talking about stumbling into furniture either! If you have a taste for all things paranormal I'm your gal. Without further delay here is my question for you to answer. 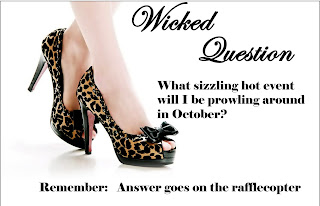 Look around my blogsite for an October reader event, it shouldn't be too hard to find. What, you may ask am I doing for the giveaway? I'm sending the lucky winner an autographed copy of my book Dark Passion Rising. The first book in my Dark Breed Enforcer Series. Nothing better to prime you for the second book Passion's Flight and just released Dark Hunter novella. Here is a small teaser for Dark Passion Rising. 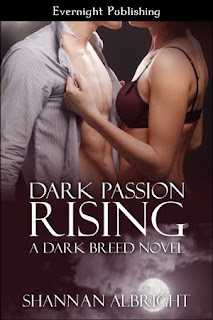 BLURB:
Tambra Ellis has just had her world turned upside down! Surviving a bite from a Lycan, attracted to one hot vampire guy and now she has to look forward to turning into something from some bad werewolf movie.
Marcus Valerian has enough on his plate without the added complication of Tambra Ellis. Fiery and independent? Sure. Beautiful with a body made for sin? Oh Yeah. And a human cop. Tambra is everything he needs to stay away from.
As leader of the Tribunal’s enforcers it’s up to him to find out why the Dark Breeds are going feral and killing humans in ever increasing numbers. Tambra’s life is in the balance as the secrets of her past place her in the middle of old deceits and a betrayal that will change the world forever.
Will Marcus and Tambra’s love survive or will it be too late.
EXCERPT:
Tambra gave him an incredulous look.  “Are you telling me I am turning into a…a dog?” She jumped up, pulling the comforter around her, and headed for the door.  “Look buddy, I don’t know what your damage is, but I want no part of it, okay?  I’ll just call a cab and be on my way.”
Marcus moved to the door in a burst of speed, and stopped with his arms folded across his chest, lips compressed into a thin line as he glared at her.  He drew his brows low in a scowl.
“W…what the hell are you?” she stammered, unable to mask her unease.
“I am not here to harm you.  I have been the one tending to you as your body adjusted.” “You haven’t answered my question,” she pushed.
“That’s because it’s not relevant to the situation.”
“Like hell, asshole.  If it affects me then it is my business.”
Marcus liked her toughness, finding it remarkably refreshing.  Her strength was impressive, not many could make it through the beginning stages of the change when turning from human to Were, yet she had fought through it.  She had overcome it all, despite how badly she had been injured.
He used his most reasonable tone to calm her, knowing that the next few minutes was crucial to keeping her receptive to what he had to say.  He took a deep breath and let it out slowly, making his tone as calm as he could manage.  “At this time the only thing we need to focus on is your change.  You are not out of the woods as of yet.  There are too many things that could go wrong.”
Her eyes widened in horror as she took a shaky step backward.
“Oh, God.  This isn’t happening.  It can’t be real.  Werewolves don’t exist.”
“Believe me, they do exist.  Denying what you have seen will be foolish and dangerous, for you and everyone you’re around.”
“No.  I don’t believe this.  I won’t believe it.  There has to be some logical explanation for what I saw.”  The sharp edge of hysteria rose in her voice.  “I will not turn into a dog.   I don’t even like dogs.”
That made him smile despite the seriousness of the situation.  She was absolutely adorable and he was in deep shit because of it.  Yet, he couldn’t seem to make himself care. “Wolf, not dog.  You were bitten by a Lycan, not Lassie.”
“Ha, ha, laugh it up big guy.  You don’t have to worry about fleas.”
Fill out the information below to be entered in the grand prize
﻿
a Rafflecopter giveaway

Don't forget to visit these wonderfully naughty authors to enter their individual drawings.